Receding gums, better known in dentistry as a gingival recession, are when the roots of the teeth are exposed through the loss of gums.

Brushing too hard, a wrong cleaning method and / or a too hard toothbrush can damage the gums in such a way that it retracts. Brush preferably with a soft toothbrush and do not apply too much pressure while brushing.

After a successful periodontal treatment, the supporting tissue around the teeth will heal. The gums will withdraw slightly and the space between the gums and the tooth or molar (pocket) becomes smaller.

Note: It is not wise to avoid a periodontal treatment because you are afraid of receding gums. If the inflammation remains present, the chance that the gums will withdraw further will also increase, and there is also a greater risk of losing teeth and molars. After healing of the support tissues, the height of the gums will usually remain stable.

There are more factors that, together with the aforementioned causes, can increase the chance of withdrawal of the gums. 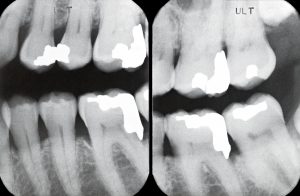 As soon as you see an abnormal deviation of your gums, whether they are swollen or bleeding, you should contact BRUSH! Mondzorg. We can give you advice and instructions to ensure that your gums do not recede further.

There are different stages of receding gums, so it is very important that you intervene on time.

The early stage contains inflammation, by adhesive accumulation, with surrounding irritation of the gums. Although the teeth are still well established and no other tissue damage has occurred. However, if left untreated, it can lead to periodontitis.

Regarding the treatment of receding gums, the instructions given by your dentist or dental hygienist can vary greatly, depending on the severity of the condition of your gums. This can be, for example, changing your brushing habits or a (deep) cleaning under the gums.

If someone has signs of severely withdrawn gums, a graft from a part of the mouth can be an option.

How to stop receding gums

When it comes to treating receding gums, the only thing better than treatment is prevention, so as long as you take care of your gums, you greatly reduce the chances of suffering from sensitive gums.

Many are misled into believing that it’s just a consequence of growing older, but this isn’t necessarily the case. Following these simple steps would definitely aid the avoidance of such problems:

Unfortunately, some people are saddled with the predisposed notion of this problem, always at risk of needing receding gums treatment because it can be hereditary, but that doesn’t mean you can’t take preventative measures, also. Prevention and subsequent early diagnosis will all aid in minimal discomfort and reduce the chances of painful gums and tooth loss.

To find out more about Receding gums please call us on 070-2135700 to speak with our friendly team or fill out our contact form.