Your teeth and gum during pregnancy

It is important to maintain your teeth properly during pregnancy. Because of hormonal fluctuations, you have more chance of developing inflamed gums.

To the dentist and dental hygienist during youre pregnancy

It is important to keep going to the dentist during your pregnancy. Do indicate that you are pregnant. Some treatments the dentist will delay until after the pregnancy due to an increased risk. The dentist hygienist can advise you on how best to take care of your teeth during pregnancy. Especially because you have a higher risk of inflamed gums during youre pregnancy. 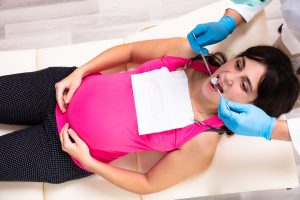 During pregnancy the hormone level in the body rises. With some women, the gums become redder and swollen, and bleed during brushing. This sensitivity is a hypersensitive reaction to plaque and is caused by an increased level of progesterone in your body. This gum disease during pregnancy is also called ‘pregnancy gingivitis’. This can occur especially between the second and eighth month. We can advise you on how to keep your teeth clean with the toothbrush and additional resources and help you to prevent further problems.

In the first months of pregnancy, you may have to vomit due to morning sickness. And although you are probably inclined to brush your teeth right away, you better wait. The stomach acid makes the enamel vulnerable. By brushing directly you are more likely to brush away the enamel. It is therefore better to rinse your mouth well with water or a fluoride mouthwash.

In dentistry only X-rays are taken of the teeth or the jaw. The radiation is therefore not in the vicinity of the unborn child. For this reason dental X-rays during pregnancy can in principle be made without any objections.

When periodontitis develops during pregnancy, it is important to treat the condition before the 28th week. Research among two hundred women has shown that two percent of the women who received treatment before the 28th week of treatment were born prematurely. This was ten percent among women who had not had treatment. The sooner the treatment, the better is the conclusion. Yet research shows that treatment after the 28th week is possible and still better than no treatment and wait until after delivery.

Even periodontal treatment for the 35th week of pregnancy appears to have a positive effect on the birth weight and the time of birth.